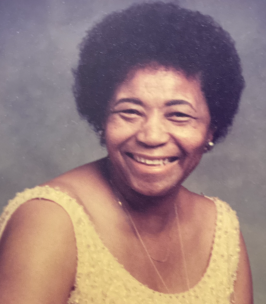 She was raised and nurtured in a Christian home and accepted Christ at an early age uniting with the Mt. Zion Baptist Church. Her formal education was at the Morning Star School of Woodlawn, TX. Mrs. Pansy, aka “Aunt Sant” was reared up to be a hard worker and always stayed employed even into her 70’s, retiring from AT&T.

Most of her life was lived in Fort Worth, TX. She met and married Donald Lewis there. The couple adopted a daughter Roslyn in November of 1958. The marriage ended and she relocated to Jamaica, New York and resided there for many years. Upon returning to Fort Worth, Aunt Sant met and married the love of her life, Mr. James Allen Dawson. They remained together until his death. She passed away on Friday, July 2 at her home surrounded by loved ones.

She was preceded in death by her husband, parents, sisters and one brother.

Aunt Sant will be missed and her memory cherished by a daughter, Roslyn (Brian) Rawlins of Austin, TX; three grandchildren, Brian Allen Rawlins of Fort Worth, TX, Benjamin (Shenile) Rawlins and Roslyn Marie-Monei’ Rawlins both of Austin, TX. She leaves special grand nieces, Amber Washington of Mansfield, TX and Kortnee Debouse of Burleson, TX; a special nephew, Oliver Hurd of Marshall, TX; very special friends, Margaret Quigley (lifelong) and Evelyn Stewart both of Fort Worth, TX; and neighbor, Angel; that was like a son to her; Pastor Reuben Thompson and Mrs. Lorraine Thompson along with the Community Christian Church where she was last a member. for reaching out to her until the very end.