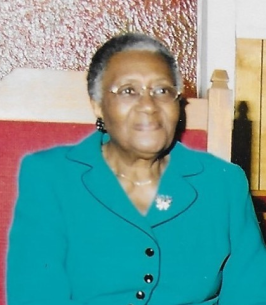 Ovada L. Stotts was born December 18, 1924 in Longview, Texas to Willie and Viola O’Neal. She attended Park Elementary School and Central High School of Marshall, Texas and graduated from Hurd’s Beauty College in 1954. Ovada worked at First Baptist Church for 35 years, as a dietitian until she retired.

She married George Stotts in 1941 and to that union four children were born.

She is survived by her sons, Ellis Stotts, Tom and his wife, Shirley Stotts both of Marshall, TX; her daughter, Flo and her husband, Bob Ray of Wyoming, MI; a daughter-in-law, Karen, wife to late son Charles; grandson, Myro and grand-daughter, Tina and a host of great-grandchildren.

She was preceded in death by her husband, George Stotts; her son, Charles Stotts of Lansing, MI; and both of her parents.

She was the glue in the Stotts family. She always puts others first, before she thought of herself. She was the greatest mom anyone could ever have. Though she is gone, she will not be forgotten for her sweet disposition, her warm love and care for others. She was a dear mother, grandmother, and friend. We look forward to seeing her in the resurrection, of which she believed in, according to John 5:28-29. Until then, we will all miss her dearly.